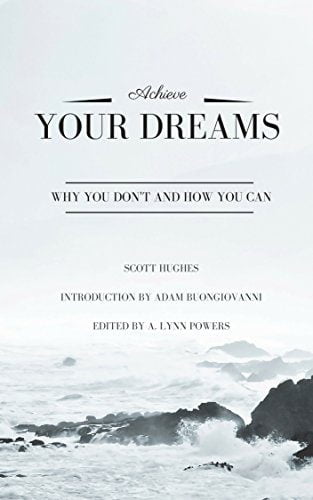 Achieve Your Dreams –
Why You Don’t and How You Can

Why You Don’t and How You Can

I was given Achieve Your Dreams: Why You Don’t and How You Can by Scott Hughes in exchange for an honest review while it was the OnlineBookClub.org Book of the Day.

Achieve Your Dreams: Why You Don’t and How You Can is a fairly short self-help book, which uses writing a book as an example for achieving one’s life’s goals in general. It is written in the style of a talk or lecture and Hughes supports his propositions with statistics and quotations from third parties.

The basis of his argument is that most people do not reach their potential not only because of the discouragement of their peers, teachers and even parents, but also because of their fear of failure. Hughes supports his reasons for saying this with several relevant arguments and examples.

This is a difficult subject to write about, and to review, because the reasons why someone thinks others are under-achievers are necessarily subjective and it is hard to argue with someone’s beliefs’ in the same way that it is useless to argue religion or politics with someone of a different persuasion.

However, my hat is off to anyone who attempts a topic such as that covered by Achieve Your Dreams: Why You Don’t and How You Can  and dares to do so in public (in a book). Having said that, I do not agree with everything that Hughes says.

The reasons given in this book for why people do not succeed are Hughes’, but they will find plenty of support, although not from people like me who believe in Karma or and a (chosen) Fate. As I said above,  the reasons why people apparently do not achieve their potential is subjective and therefore open to debate, although not in this book.

Aside from that, Hughes repeats several points a few times within the small number of pages in the book, although it appears to have been professionally edited. Furthermore, the title and cover are relevant to the contents.

If you would like to read more about Achieve Your Dreams: Why You Don’t and How You Can by Scott Hughes, please go to:  http://forums.onlinebookclub.org/shelves/book.php?id=55106