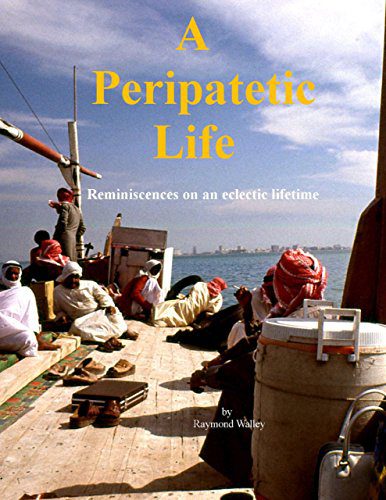 Reminiscences On An Eclectic Lifetime

I was given A Peripatetic Life, Reminiscences On An Eclectic Lifetime by Raymond Walley in exchange for an honest review while it was OnlineBookClub.org Book of the Day.

A Peripatetic Life is written in the first person and is the short autobiography or memoire of the author, who is prompted to write his life’s story down for posterity by the virulent strain of prostate cancer, which the doctors say will kill him within six months.

Ray, as I shall call the author, was born English during the Second World War in Birmingham, where he went to school, and got his first jobs, his favourite of which was on the railway. However, a temporary lapse of judgement finished his promising career there, so he joined the Signals Corps of the army, which took him Germany and several locations in countries in the vicinity of the Mediterranean Sea. I think that it was in the army that Ray developed a pleasure in travel and living abroad.

After his demobilisation from the army, he had several very interesting and varied posts of employment until he alighted on recruitment and the personal profiling necessary to find candidates who could live abroad for a protracted length of time. Initially, he made several mistakes, choosing unsuitable candidates, so he sought training and this put him on a course which lasted for the rest of his employed life, although it did not stop him from working for money as a specialist maker of model trains, and even publishing articles on the subject in his ‘retirement’.

After his death sentence, Ray takes up travelling with his wife in Europe again, especially in Spain and Cyprus.

I really enjoyed A Peripatetic Life. I felt as if I got to know the author, and even if I didn’t, I have had many of the experiences that he had, although perhaps most British boys of that era did the same sort of things, such as making Airfix kits and hanging them from the ceiling; cycling;

going on school outings to Cheddar Gorge; and later, philately, making wine using books and gear from Boots the Chemist, learning languages and working in Germany. I even had a scar on my thumb noted in my passport as a distinguishing mark!

I wish I had met Ray, because I am sure we would have got on well. He even talks about Andalusia and Ronda, which is near where I live now!

This book will suit many people, but especially the army of Baby Boomers out there.

I thought the cover and the title appropriate, and the text has been well, if not expertly edited (there are quite a few missing articles).

I would recommend A Peripatetic Life

boy Raymond Walley to anyone.